Prof. Dr. Slavko Bernik and Doc. Dr. Matejka Podlogar, in collaboration with researchers from the Shanghai Institute of Ceramics, Chinese Academy of Science, published an article in the journal ACS Applied Materials & Interfaces (IF 9.229) in which they report on a novel type of sustainable ZnO-based varistor ceramic that is based on Cr2O3 as varistor former and oxides of Ca, Co and Sb as the performance enhancers. The varistor ceramics ZnO-Cr2O3 are distinguished by an ultrahigh coefficient of nonlinearity a, a wide range of breakdown voltage EB and a very low leakage current IL. Compared to previously known ZnO-based varistor ceramics, the novel ceramics do not contain highly volatile Bi2O3, expensive rare earth elements (Pr6O11) or toxic V2O5, and the microstructure is practically single-phase. The formation mechanism of electrostatic Schottky barriers at the grain boundaries of ZnO with the addition of Cr2O3, which are the reason for the varistor properties of ceramics is explained. The discovery of ZnO-Cr2O3 varistor ceramics, for which the authors obtained a Chinese patent, represents a major breakthrough in the field of varistors and could have a major impact on the global market of surge protection. 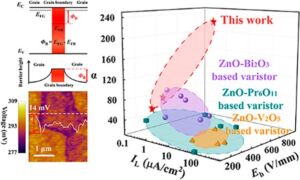